Q1. Which of the following countries border the Bay of bengal? 1. The proposed CUET will be conducted in 13 languages,
2. It seeks to make it mandatory for all Central Universities (CUs) to conduct admissions using a single national level test score
3. This would spare aspirants from taking multiple entrance tests
4. It will also eliminate the unfair advantage gained from disproportionate scores in class XII.

5. The proposal is seems to be influenced by the National Education Policy

Centralising tests
A common test as the sole determinant of merit for admission is problematic Common University Entrance Test (CUET):
1. The decision to conduct a Common University Entrance Test (CUET) for admission in undergraduate programmes in all University Grants Commission-funded Central Universities (CUs) from 2022-23 has triggered concerns.
2. No doubt, the proposal is influenced by the National Education Policy, which advocates common entrance examinations by the National Testing Agency for undergraduate and graduate admissions and fellowships.
3. The concept as such is not alien to the CUs. Over a dozen CUs admit students to undergraduate programmes using Central Universities Common Entrance Test (CUCET) scores.
4. The proposed CUET, in 13 languages, seeks to make it mandatory for 45 CUs — there are 54 such institutions — to conduct admissions using a single national level test score.
5. This would spare aspirants from taking multiple entrance tests and also eliminate the unfair advantage gained from disproportionate scores in class XII. Concerns:
1. Yet, the CUET may not qualify as a wholesome determinant of merit given the educational and regional disparities in India. While a vast majority study in State Boards, the test would be based on the NCERT syllabus, followed largely in CBSE schools.
2. The policy limits the Class XII marks as a qualification benchmark and not a co-determinant of merit. With the test being introduced just ahead of an admission season, students, whose learning process was disrupted by COVID-19, may find it challenging.
3. Education Ministers from Tamil Nadu, Meghalaya and Arunachal Pradesh have flagged some legitimate concerns. In the northeast, the argument about the test possibly affecting the interest of State domiciles to secure admission to a university in the region cannot be ignored.
4. It has been sufficiently demonstrated that common entrance tests spawn the coaching industry and induce cost-heavy hybrid courses from class VI onwards, creating a divide between the haves and have-nots.
5. The country has miles to go in enabling access to entry-level higher education and bridging the gender and economic gap in its university portals.
6. In such circumstances, it needs to be dispassionately examined if prescribing a single entrance test as a sole determinant of merit, either for CUs or for the higher education system as a whole, is pragmatic.

The call for OBC quota rings louder in RS
1. Rajya Sabha members from the DMK and the BJP unusually made common cause to demand that the government bring in a law to break the constitutional deadlock in the enforcement of OBC reservations in local body elections.

Q4. The “Bachan Singh vs State Of Punjab” case is linked to 1. The Bachan Singh case laid down that a court must scrutinise both the crime as well as the criminal, and then decide whether the death penalty is the only suitable punishment in the facts of the case.
2. Emphasis is to be also laid on the aggravating and mitigating factors which are dependent upon the facts and circumstances of the case.

1. Meghalaya was carved out of Assam as per the North-Eastern Areas (Reorganisation) Act, 1971
2. Khasi, Garo and Jaintia hills are situated in the Meghalaya

Assam, Meghalaya CMs sign border agreement
1. Assam and Meghalaya signed an agreement to resolve a five-decade-old border dispute in six of the 12 contested areas along their 884.9 km-long shared border.
2. The origin of the long-standing land dispute dates back to 1972 when Meghalaya was carved out of Assam as per the North-Eastern Areas (Reorganisation) Act, 1971

Q6. Consider the following statements with regard to the Bru-Reang tribes

1. They are recognised as the 75 Particularly Vulnerable Tribal Groups (PVTGs) in India
2. Majority of them are now settled in Mizoram
3. The most attractive form of dance is Hozagiri with the melodious tune of flute

What is the Bru-Refugee crisis?
1. During 1997-98, about 5000 Bru-Reang families i.e. around 30,000 BruReang tribals were displaced from Mizoram to Tripura because of ethnic violence in Mizoram. In North Tripura, these people were living in temporary camps.
Who are Bru-Reang tribes?
1. Bru-Reang tribes are one of the 21 scheduled tribes of the Tripura state in India. They are recognised as the 75 Particularly Vulnerable Tribal Groups (PVTGs) in India.
2. Reang first comes from Shan State of upper Burma (now Myanmar) to the Chittagong Hill Tracts and then to the Southern part of Tripura.
3. The Bru tribes are found in Tripura, Mizoram, Assam, Manipur, and Bangladesh. Dance is an integral part of their life. The most attractive form of dance is Hozagiri with the melodious tune of flute.
4. Ethnically Reangs are divided into two major clans namely Meska and Molsoi. They speak "Kaubru" language which has a tonal effect of Kuki language and broadly it is Kok-Borok dialect.
5. For their livelihood they pursue Hilltop Jhum Cultivation, several activities of food gathering including collection of jungle fruits, leaf, plants, fishing in stagnant water in hill slopes, hunting of wild animals and birds, etc.
6. They are nomadic tribes. It is said that they are polytheists and believe in multiple Gods and Goddesses.
Now, Bru-Reangs can settle in Tripura state because of the agreement that is signed on 17 January 2020 between the Government of India, the two State Governments, and representatives of Bru-Reangs. They will get all the facility of the schemes of Central and State government like other people of Tripura. Q7. Which of the following is/are correctly matched?

The Centre has signed several agreements to end extremism and bring lasting peace:
1. NLFT (SD), National Liberation Front of Tripura, an agreement was signed in 2019 to bring the extremists into the mainstream of society in Tripura which contributed greatly to making Tripura a peaceful state.
2. Then a landmark agreement was signed in 2020 to solve the 23-year-old Bru-Reang refugee crisis forever.
3. The Bodo Accord signed in 2020, resolved the 50-year-old Bodo issue while maintaining the original form of Assam.
4. The Karbi-Anglong Agreement was signed in 2021 to resolve the longstanding dispute in the Karbi regions of Assam.
5. Between 2019 and 2022, over 6,900 armed cadres of insurgents have surrendered in the region. This is a very big achievement. Who are Karbis?
Karbis is a major ethnic community of Assam, which is presently splintered into various groups and factions. Originally, they are one of Northeast India’s tribal groups, largely inhabiting the Karbi Anglong and Dima Hasao (formerly North Cachar) hills districts.
The centre signed a tripartite agreement- "Karbi Anglong Agreement" on September 4, 2021 with representatives of Karbi outfits in New Delhi. The agreement was signed in the presence of Union Home Minister Amit Shah and Assam Chief Minister Himanta Biswa Sarma.

Q8. Arrange the following in west to east order 1. The population of one-horned rhinos in Assam’s Kaziranga National Park and Tiger Reserve (KNPTR) has increased by 200 in the past four years, results of the latest census revealed, highlighting the success in combating poaching of the mammals whose horns are used in Chinese medicine.
2. As per the census conducted in March 2022, the count at KNPTR, which is the world’s largest habitat for the endangered one-horned rhinos, stood at 2,613. In the last census, carried out in 2018, the national park recorded a rhino population of 2,413.
3. The census revealed that Kaziranga has a healthy population of rhinos despite casualties due to natural deaths, floods and in-fighting. Reduction in poaching has benefitted the species.
4. Rhino censuses were carried out in other national parks and wildlife sanctuaries in the state. Orang national park recorded an increase of 24 rhinos from 101 in 2018 to 125 now while in Pobitora wildlife sanctuary, the figure went up by 5 — from 102 in 2018 to 107 in 2022. A census of rhinos in Manas national park will begin in April.

Q9. Sariska Tiger Reserve is situated in the state of 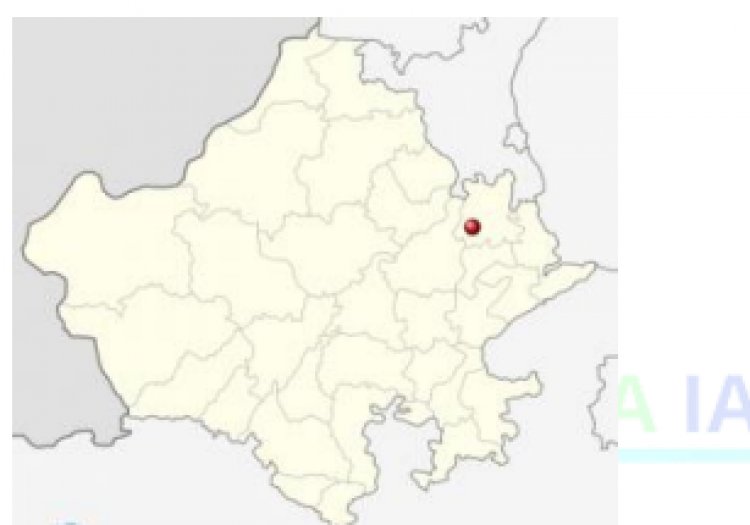 1. Military helicopters were pressed into service after a wildfire in the Sariska Tiger Reserve. The reserve situated in Rajasthan has 27 tigers.
2. According to the Forest Survey of India, a total of all 211 major forest fires have been reported across India with, the most reported from Madhya Pradesh, followed by Odisha, Chhattisgarh and Jharkhand

Q10. Which of the following rivers fall into the Arabian Sea? 1. Gujarat has asked the central government to put on hold the project connecting the Par, Tapi and Narmada rivers as the state government does not want to displace tribal people from their ancestral land.
2. Residents of the region have been protesting the project since 2010 when it was first proposed. The latest agitation started in early March after Union finance minister Nirmala Sitharaman announced the Par-TapiNarmada (PTN) project, among other river-linking programmes, in her budget speech.
3. The PTN link envisages the transfer of surplus flows from the west-flowing Par, Auranga, Ambika, and Purna rivers between the Par and Tapi basins to water-scarce regions in Saurashtra and Kutch, and the Narmada, Chhota Udepur and Panchmahal districts in South Gujarat.
4. The PTN link involves the construction of six dams: one on the Jheri reservoir across the Par in Nashik, two in Valsad’s Dharampur, and three in Dang’s Ahwa.
5. The project mainly covers areas in southern Gujarat, but it also covers part of Maharashtra, north of Mumbai on the Western Ghats. The basins of the links: The Damanganga-Pinjal (DP) link
The DP link proposes to tunnel unutilised water from the Bhugad (in Gujarat’s Valsad district) and Khargihill (in Maharashtra’s Palghar district) reservoirs in the Damanganga basin to Mumbai via the Pinjal river in the Vaitarna basin. Estimated to cost Rs 2,800 crore, it involves the construction of two dams — in Valsad’s Kaprada and Palghar’s Jawahar — and three gravity-based tunnel links. Model Question and Answers for APSC | Assess the role of the Government of India...